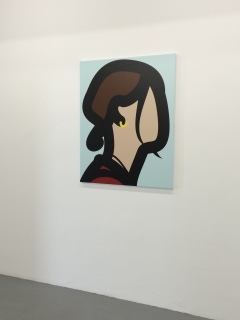 Julian Opie’s current exhibition at the Viennese Krobath Gallery to be found in the Eschenbach Gasse Gallery Street at no. 09 is taking me back in time from June 2016 to my first encounter with Julian’s early sculptural work back in Autumn 1997 in the exhibition ‘Need for Speed’ curated by Eva-Maria Stadler and Thomas Trummer in the framework of the Styrian Autumn Festival 1997.

It seems like a pretty long time and since then I became more and more familiar with Opie’s oeuvre as I worked at Lisson Gallery, London (UK) and got the chance to follow his path and developements closely from an insider’s perspective.

My late evening studio visits dropping things off for my boss or getting material for the gallery also allowed me to get to know Julian, the creator of the art works and got a glimps of his ideas and the behind stories that led to his creative output.

In 2000 I was lucky to be the contact point for his Outdoor Art Commission in Wolfsburg, Germany which was a good way to co-operate and use my German in a useful way to communicate between gallery, artist and the responsible parties in Germany.

Since then I started following Julian’s career at Art Fairs and again got an insider’s view as my best English friend worked as a technician at Julian’s studio travelling to Art Fairs to oversee the installation process in situ.

The current show at Krobath Vienna shows paintings ans sculptures of a more private nature mainly his family opposing his early paintings mainly started as commissions for collectors who wanted a special portrait of themselves or their loved ones.

However, Julian never sold his soul and kept doing his private art works and works closer to his heart like the album cover for a Blur CD or later his first steps in the digital work a screen safer of his later wife Cathrine.

Soon later he started to expand these digital first steps into large LED sculptures that became more and more popular in the past decade.

At the last fair in 2015 I saw one new work that made me see a new path back to the more subtle works a tile mosaik of Juno Factory Owner installed at Lisson Gallery in a very subtle spot that only came to view upon second sight and therefore was perfect for this quiet but nonetheless strong work.

At Krobath Vienna I first saw his latest sculptures made of plexi glass and reminded me of his first wooden animal sculptures which always were and are my favorite work of his since I first spotted a transparency in the photo archives of Lisson Gallery in 1998.

All there is to say: Well done Julian for all the hard work you’ve done and still stayed true to yourself and I love to see that you are building on your strenghts sculptures again.

Sometimes the most simple things are simply the best because one finds their roots again.